Today we can reveal for the first time a 3D Multibeam Sonar image of the Baltic Anomaly. This image was posted on the team’s Facebook page last night and gives us a unique insight into the underwater geography some 80 metres below the surface of the Baltic Sea.

“As we have said before the multibeam does not give you a exact image of the bottom on a smaller scale. However, it gives you a good 3D image of a larger landscape”. – Peter Lindberg 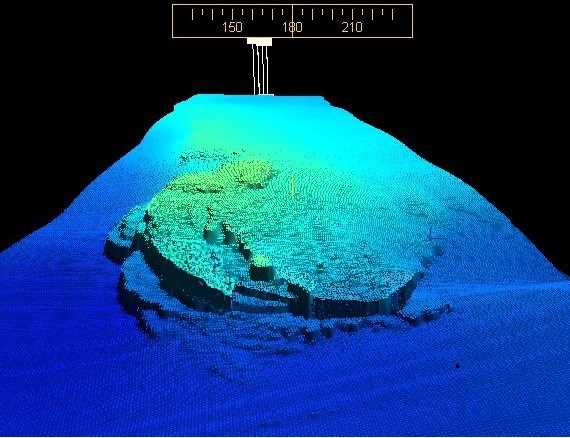 The anomaly as a 3D multibeam sonar image. South is towards the top of the image.

OceanX Co-Founder Peter Lindberg had this to say…

“Ok, here it is in all its glory! Remember that there are a lot of things you do not see. The wedged gap between the upper part and the foundation for example. Or the right side (from the direction the image is, looking south) is completly gone on this image. Maybe we passed over the anomaly so the vertical sides on the right side were shadowed by the anomaly it self.”

“The image is treated so obvious “false” echoes are taken away. But it is impossible to work with the image more than that. It gives us a sence of the main features of the anomaly. You can not look into details because there are no details in this image. Things that might stick up might do so because of the bad resolution, they might not be there at all.

“Hello folks, I will educate you a bit regarding multibeam. The image I show is of a wreck in Norway, recorded under perfect conditions. As we have said before the multibeam does not give you a exact image of the bottom on a smaller scale. However, it gives you a good 3D image of a larger landscape. When it comes to the multibeam data we got last year it is full of faults.”

“The motion sensor did not work propertly, it compensates for waves and such motions. The water velocity data was completly corrupt which means we did not get better resolution than approx 8 meters, it should be like 0,2 meters or so. This means that our image of the anomaly does not show the right features. You understand these things? If you do I will show you a corrupt multibeam image of the anomaly later to night.” 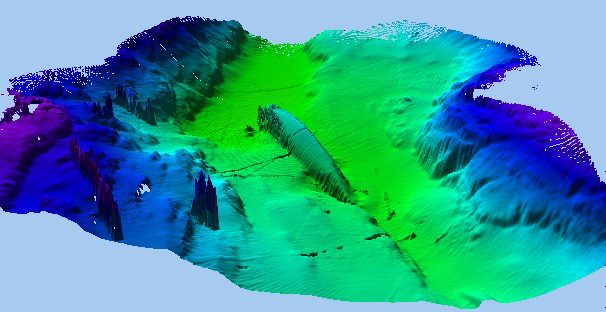 Craig Brown
Craig is a freelance writer and researcher studying and writing about the UFO phenomenon, remote viewing, free energy, and other strange phenomena for over 20 years. He is also a qualified clinical hypnotherapist.
Categories: All-Posts, Anomalies, Forbidden Archaeology, Human Origins, USO
No comments yet…