The OceanX team recently came back from a long anticipated third voyage to the Baltic Anomaly site.  There were some very interesting and intriguing goings on which will be the subject of an upcoming post.  But for now, the following news on the analysis of rock samples deserves a post of it’s own given the potential implications. 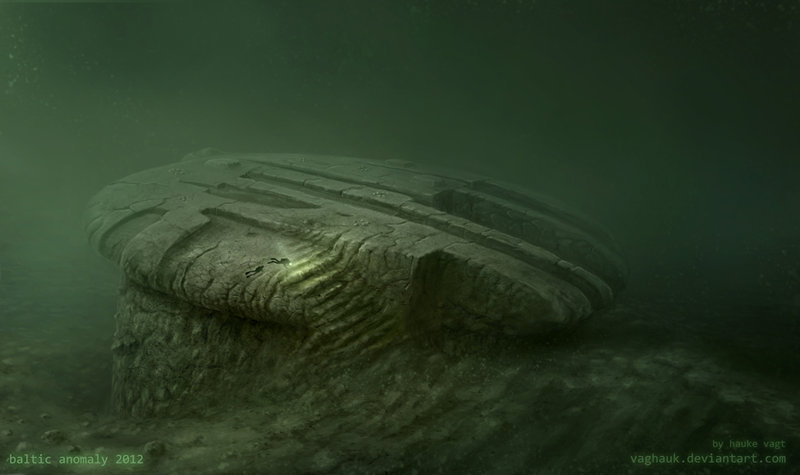 “It is not an object which is man made in modern time. What ever it is it’s either from during the ice age or pre-ice age.” – Peter Lindberg, February 24, 2013

Using a technique known as Infrared Spectroscopy, a sample taken from the anomaly by one of the divers was brought back and then subsequently sent for analysis to the Weizmann institute in Israel. The results are very unexpected indeed. The results  indicate that a piece which was from the circle anomaly is made of Limonite and Goethite. These materials are part of the  Iron oxides/hydroxide family – “that it is metal” and that “these materials would most likely to be found in a modern construction”.

“Weizman institute said that it’s strange to have it in a structure like this and it’s more likely to find it in a modern shipwrecks (with metallic parts).I asked him: “So we can say that this thing is probably not of natural existence?” He think that it’s probably “modern” and not archaeological, something that someone built?” 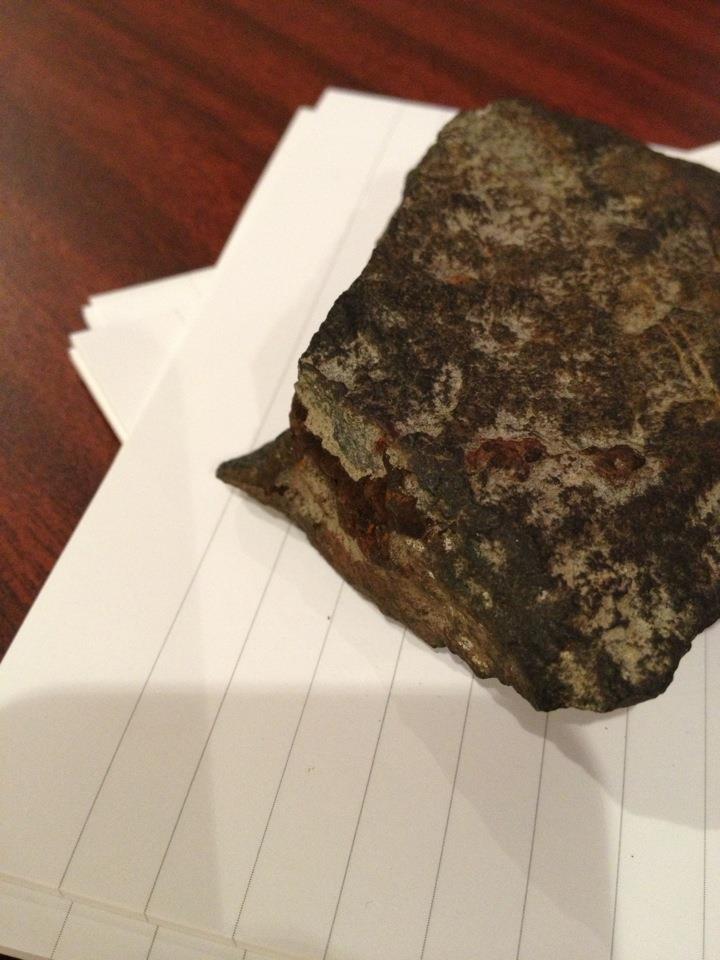 The rock sample analysed by the Weizmann Institute

The spectroscopic graph below should be read as follows:

a= The black powder, originally a piece broken off by a diver, directly off the circle anomaly.

b= Another solid piece broken off by a diver, directly off the circle anomaly

c= Comparison to a “pure” Limonite

Weizmann Institute’s opinion is that it is strange to find these materials in a structure like this as these materials would most likely to be found in a modern construction, such as on a ship wreck in this case. 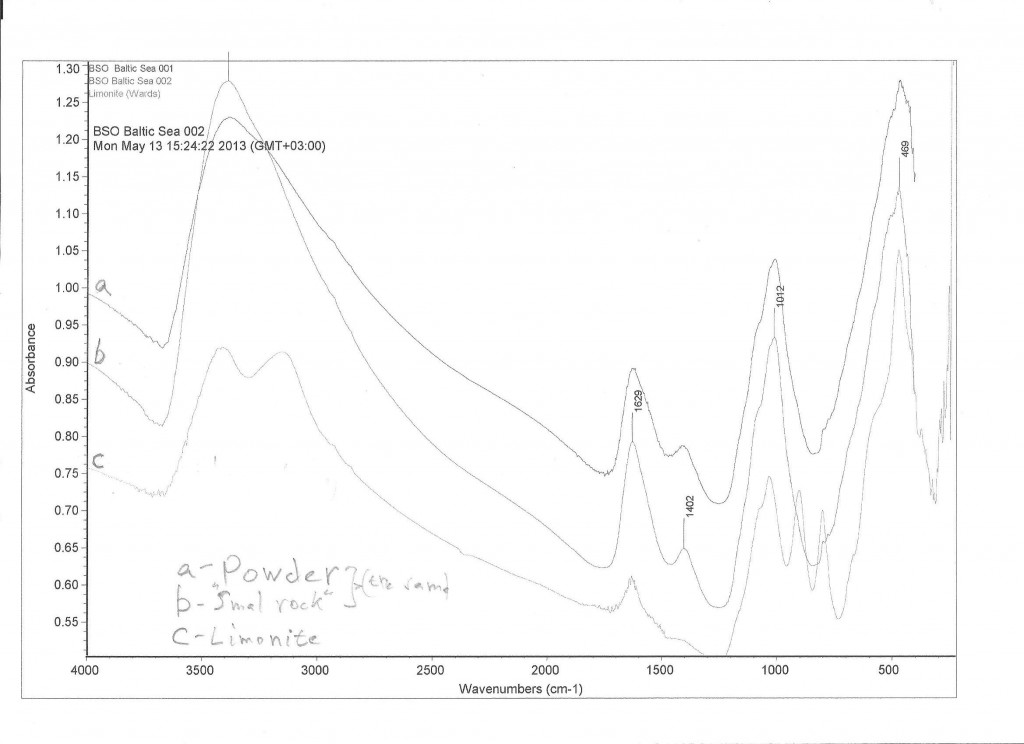 Editor’s Note: According to Wikipedia “Infrared spectroscopy (IR spectroscopy) is the spectroscopy that deals with the infrared region of the electromagnetic spectrum, that is light with a longer wavelength and lower frequency than visible light. It covers a range of techniques, mostly based on absorption spectroscopy. As with all spectroscopic techniques, it can be used to identify and study chemicals. A common laboratory instrument that uses this technique is a Fourier transform infrared (FTIR) spectrometer.”

Goethite is primarily an Iron Ore. “It may also be precipitated by groundwater or in other sedimentary conditions, or form as a primary mineral in hydrothermal deposits”

“Limonite is one of the two principle iron ores, the other being hematite, and has been mined for the production of iron since at least 2500 BCE.” …..”Although originally defined as a single mineral, limonite is now recognized as a mixture of related hydrated iron oxide minerals, among them goethite, akaganeite, lepidocrocite, and jarosite.” – source: Wikipedia. It is often the major iron component in lateritic soils. It is often deposited in run-off streams from mining operations.

Iron caps or gossans of siliceous iron oxide typically form as the result of intensive oxidation of sulfide ore deposits.[10] These gossans were used by prospectors as guides to buried ore. In addition the oxidation of those sulfide deposits which contained gold, often resulted in the concentration of gold in the iron oxide and quartz of the gossans. Goldbearing limonite gossans were productively mined in the Shasta County, California mining district.[10] Similar deposits were mined near Rio Tinto in Spain and Mount Morgan in Australia. In the Dahlonega gold belt in Lumpkin County, Georgia gold was mined from limonite-rich lateritic or saprolite soil. The gold of the primary veins was concentrated into the limonites of the deeply weathered rocks. In another example the deeply weathered iron formations of Brazil served to concentrate gold with the limonite of the resulting soils.

These minerals found in samples of the anomaly and lying close by are Iron Ores, one of which gold can be frequently be found within.  Other samples like these have been found to have the appearance of being ‘burnt’ or to have been superheated.  It is interesting to note that back in 2012 a team of military trained remote viewers spent hours analysing this target – their conclusion published many months before this data was released was as follows -

“TRANSCEPTION’s preliminary analysis of the seven sessions specifically tasked against the Baltic Sea USO target (plus another one based on directly related tasking), suggests that the site is a complex of structures–a mining/production/resupply facility–among other things, centered around a special type of “lock” (described by the viewers as being “like” a “dam”, “barrier”, “missile silo”, and even Han Solo’s “moon tube”), mechanically operated and comprising, at least in part, a cluster of densely packed, hydraulic levers that arc energetically back and forth, controlling the flow of a liquid (most likely water) used in the production of a much needed viscous, energetic, oil-like substance, dark in color and possibly toxic, with constituent and extremely valuable elements/materials mined locally.” – link

The Baltic Sea has been through many geological changes and periods. It was once cut off from the saltwater ocean and was called Ancylus Lake 8,000 – 9,500 years ago. Tracing back through history reveals it has likely been covered by ice or water for at least 130,000 years when it was known as the Eemian Sea.  So if the anomaly is constructed (which is what the evidence so far suggests), then any construction would pre-date the pyramids in Egypt by at least 120,000 years.

More information and scientific study is certainly needed to make an exact determination as to the nature of this site, it’s purpose and to answer the question of who built it, but the latest analysis of these samples is very intriguing to say the least and could pave the way for establishing a link with our long forgotten past and perhaps great civilizations that came and went.