Starting in May 2006 and peaking in 2007 more than a dozen different witnesses in different parts of the United States and further afield reported seeing weird dragonfly drone-like aerial objects in broad daylight.

Starting last week and over the coming weeks, I will be taking a fascinating new look at the events that took place around that time.  For many this will be the first time they have heard these reports as it was not reported to any significant extent in the mainstream media.

One of the original Chad photos near Highway 17 Los Gatos CA.

Lake Tahoe – The second of my special reports  – by Craig Brown

Described as having a “ring body” with a tail and “appendages”,  the craft were slow moving, usually silent, or if anything they emitted a static, crackling, or sound of high voltage usually accompanied by the feeling of a static charge in the air.  The craft have mostly been observed and photographed above trees or power poles for some reason.

Popular investigative news site Earthfiles.com, written by Linda Moulton-Howe covered the ever evolving story as one after one, new witnesses, testimony and photos emerged throughout 2006 and 2007. Linda had taken to calling them drones since the bodies of the craft were only described as a maximum of two feet thick and therefore not capable of being piloted by humans, but rather they appeared to be being remotely piloted or controlled by some other means.

After the initial publicity surrounding the Chad photos (see previous report) another report of these craft emerged. It was  submitted to MUFON on 5th MAY 2007.  The report submitted is printed below along with the two cellphone photos of the object and a screen-capture of the original MUFON database entry.  According to MUFON this witness was identified as Deborah McKinley of San Jose, but this has never been verified.

“My husband and I were in Lake Tahoe over the weekend. We left on Friday afternoon and came back Monday morning. On Saturday at about 7 PM, I was walking out to my car to get a sweater when I saw this thing in the sky. It was pretty close I think, but still above the trees. It was moving and spinning slowly, heading towards my right.

I was startled and confused at first and wanted to take a picture, but our camera was still inside so I took two pictures with my camera phone before it passed behind the roof of the house. I ran around to the other side and was yelling to my husband to come out. We came around the other side and saw it just as it was going down behind some trees. He didn’t get a good look at it, but he saw enough to convince him that it was something really strange.” 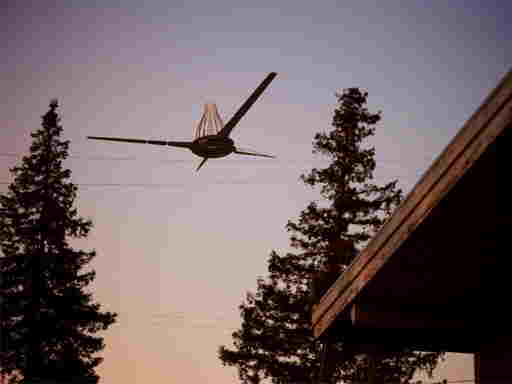 First of two cellphone photos showing the drone hovering over some trees and powerlines.

Second of two cellphone photos showing the drone disappearing behind this house.

“We decided to take a drive around the area to see if we could see it again, but we never did. We didn’t see it the next day either. Since we were renting the cabin for the weekend we didn’t know any nearby residents but I would bet at least a few other people saw it. It was very visible and very strange looking. I was definitely a little freaked out but my husband didn’t seem very bothered by it. He was more interested in it than scared.”

“He wanted to drive around a lot longer trying to find it than I did! It didn’t make any noise except for a very, very faint sound that is hard to describe but sounded like something vibrating. We both heard the sound although just barely. It moved in a very straight line when it went over the house but when we saw it on the other side of the house, when it was going down behind the trees, it made a very sharp turn. It didn’t move like a helicopter or airplane, it was very “exact”.

“We did see one person on our drive who was a few blocks away taking a walk and asked him if he saw it, and he said no. Then we asked him if he heard any weird noise and tried to describe it as best we could, and he said he might have but he wasn’t sure. By this time it was at least 20 minutes since we first saw the thing so who knows.”

“I talked to some friends over the week about sending these to a newspaper or something but a guy at work suggested I look up Mufon, so I’m starting with you guys.”

To the best of my knowledge there has never been any specifically identified location for the Lake Tahoe photographs despite the efforts of many people using Google StreetView.  According to some information sources the photos are most likely to have been taken on the west side of Lake Tahoe possibly in Eldorado or Placer County, but that’s the extent of the investigation. 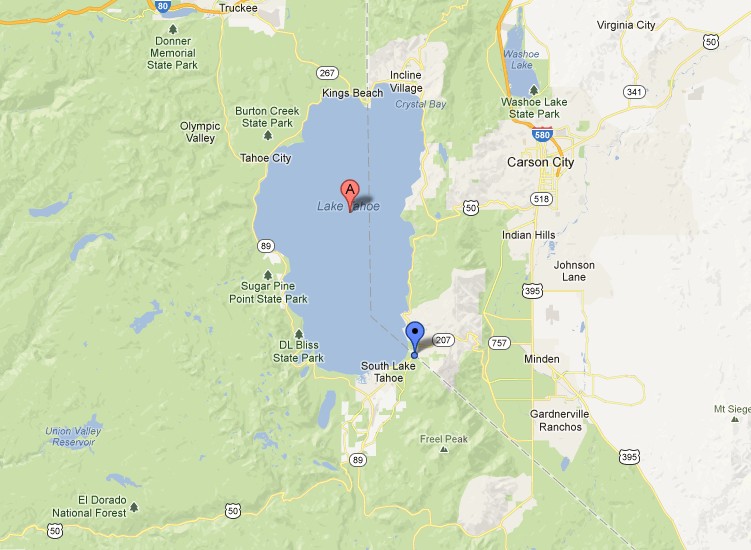 As I mentioned previously these craft seem to be always sighted near or above trees and forests or powerpoles. It is curious that in this instance also the photos show the craft just above treetop height and again it seems to be skimming / rotating as it moves along above the powerlines. The whole area to the west of Lake Tahoe is wilderness, including several state parks and remote forests.

In the next article in this series examining the strange drone craft I will be reviewing the Rajman sighting which occurred in the city of  Campbell CA on the May 20th 2007.

Plea for new information and witnesses

What information do YOU have about these things?

I am very interested to hear from you if you were an original witness or if you have you have had your own personal sighting of one of these drones which so far has not been reported. If you know someone who has had an experience with these things I would also like to hear from you.  Did you work at the Palo Alto CARET Laboratory?  Do you have photos of unexplained objects similar to this? Have you been keeping information on this subject to yourself for a time and now want to share?  I would encourage you to contact me with your information.

You can reach me at contact@overunity.co – or private message me through our special Drone Facebook Page All requests for confidentiality will be respected and treated in the strictest confidence.